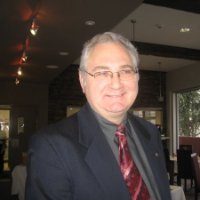 John Mercer is a Founder Member of AIEF. He served on the Board since it was established until 2007, serving in the roles of Secretary and Vice President for a number of years. Whilst now employed overseas he still retains his membership of the Institute.

Since February 2008, John Mercer has been a resident consultant with King Abdulaziz City for Science and Technology (KACST), Saudi Arabia’s national research institute, based in Riyadh. From 2008 to 2010, he was Consultant Executive Director of BADIR-ICT, Saudi Arabia’s first national ICT technology incubator, as part of a CREEDA Projects international consulting team contracted to support the establishment and initial management of the incubator. He is now the Executive Consultant providing strategic and policy advise for the BADIR Program for Technology Incubators, which incorporates a network of incubators and entrepreneurship and client finance programs. John has worked in Europe, Australia and the Middle East in a variety of management and consulting roles. John held sales and marketing positions in the United Kingdom before spending ten years resident in the United Arab Emirates and the Sultanate of Oman. During this period in the Middle East he was employed in project and general management roles for a German international trading and engineering company.

He moved to Australia in 1988 and worked as a management consultant with major corporates on leadership based organisational development programs and strategic planning exercises.

In 1993, Mr Mercer, as the first manager, established a Business Enterprise Centre in Cooma in New South Wales. For the next 15 years, he developed it into an Australian national model for rural, community based industry and business development integrating business incubation, business advisory, business training and industry, business and economic development consultancy services into its operations.

As an associate consultant of Creeda Projects Ltd, he has been involved in business incubation and enterprise facilitation consulting work in Iran, Jordon, Indonesia, Vietnam and Saudi Arabia. He has contributed to a number of papers on incubation and business advisory services as well as speaking at national and international conferences.

In 2005, he was awarded the AIEF’s national John Bailey Prize for Enterprise Facilitation at the Small Enterprise Association of Australia and New Zealand Conference (SEEANZ). He has sat on a number of Boards and Committees and continues to be committed to support those who support small business development throughout the world.

Click here to view past issues of That’s Enterprising Newsletter